I love coconut, chocolate and almonds so I love this recipe.  Also, it is so simple and did I mention it is Gluten 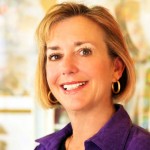 free?  Keep these ingredients on hand and you can whip up a batch of cookies in 30 minutes.

I will be making these for new neighbors in our neighborhood.  It’s a great way to say, “Welcome”.   Whatever you want to use these cookies for–they will not disappoint.

Preheat the oven to 325 degrees. Line a large cookie sheet with parchment paper anwwwd set aside. In a large bowl, combine coconut, chocolate chips, almonds and sweetened condensed mild. Stir until combined. Scoop out dough with a cookie scoop on the prepared baking sheet. You can also use a Tablespoon. I recommend spraying your hands with non-stick cooking spray because the batter will be very sticky. Moisten your fingers with water and shape into discs. Pat the tops flat.

Bake 16 to 19 minutes. The coconut should be golden brown. Let cool on the baking sheet. Enjoy!

This recipe was shared by getinmybelly.com.

That’s all for this week. Until next time…From our Butcher Block to your Table.

We have snow–lots of snow.  Kids are still home from school.  Why not make some fun memories with the kids and the snow?  I have to admit even if you don’t have kids or grandkids to do this with–it is a lot of fun for adults.  After all, we all have a little kid inside of us just waiting to get out. 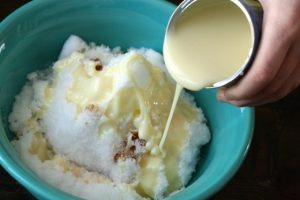 This can be eaten right away. Any leftovers can be stored in the freezer for a frozen treat.  I have made this before.   I used the recipe from happyhooligans.ca. 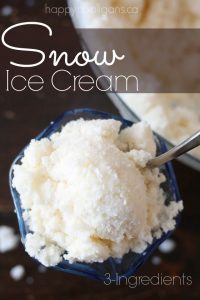 You will be delighted by how good this ice-cream tastes. You will be making fun memories. Until next time…From our Butcher’s Block to your Table.

Just seeing the title of this blog makes me smile.  I wanted to surprise the Butcher with a special dessert on Sunday so I made apple pie, with

apples I picked myself, home-made vanilla ice cream, and caramel sauce.  I know this sounds a bit indulgent, and believe me it was, but sometimes you just have to celebrate the changing seasons with something that is over the top.

I am including all of the recipes because they are simple, delicious, easy and you will have them together for easy reference.

1 Can of condensed sweetened milk

On the stove take a 3 quart pan and put the can of sweetened condensed milk in the pan. Cover the can with water. Put the pan on the stove and 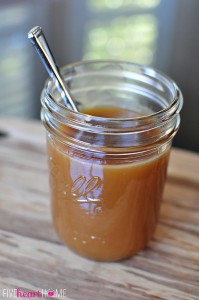 bring the water to a boil. Put a lid on the pan. Turn the burner to simmer and simmer for 3 hours. Turn the can every hour. Remove the can from the water. Be careful as you prepare to remove the lid from the pan because some of the hot caramel sauce will come out because of the pressure built up. This sauce is so delicious. You can serve it over ice cream, with cut up apples. Put it in a glass container and you can heat it in the microwave.

Pie crust recipe of your choice or 2 Pillsbury ready made crusts that you roll out in your pie pan. (this is my choice)
6 to 7 cups peeled and thinly sliced apples
3/4 cup sugar (white, brown, or a combination of both)
1/4 cup of flour
1 1/2 teaspoons of ground cinnamon (more if you really like cinnamon–like me)
2 tablespoons of butter 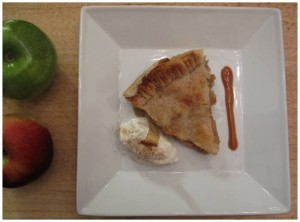 Mix these ingredients together and put in the refrigerator for several hours or overnight.

I went to Rittman Orchards and picked fresh strawberries.  I have not done this since I was a child and forced to do this with my family–child

labor laws were not in effect back then.  Isn’t it funny how things are much more enjoyable when you, as an adult, decide to do things, compared to when you are a child and forced to do things?  I give you afternoon naps as a prime example.  What I wouldn’t give for those afternoon naps now.  I didn’t know how good I had it when I was a kid.  I decided to combine 2 of my favorite things–ice cream and strawberries–as you can imagine the result was total deliciousness.  Get out, pick some fresh strawberries, make ice cream, and by all means take a nap.

32 oz. half and half
1 can sweetened condensed milk
1 cup of fresh strawberries, remove the stems
2 to 3 tablespoons of sugar

In a 2 quart container, combine the half and half and the sweetened condensed milk. In a separate bowl mash together the sugar and strawberries. Add the strawberry mixture to the half and half mixture, stir and refrigerate several hours or overnight. 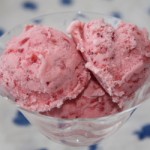 If you don’t have an ice cream maker this is a great investment. They are very reasonably priced. As I mentioned I have an electric model. I use the ice from my ice maker and I buy a 50 pound bag of rock salt at Copley Feed and I am good to go.

Hope you enjoy this.  Make some homemade ice cream and you are sure to make great memories.  Until next time…From our Butcher Block to your Table.